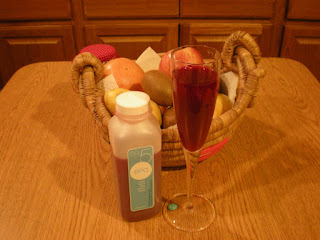 While most people toast in the New Year with champagne or some other festive alcoholic beverage, I welcomed 2010 with BluePrintCleanse juice #5, which is a mixture of apple, carrot, beet, lemon and ginger. Yumm-mmy.

Back in August 2009, my friend Anne Raso told me about an invitation she had received to the media day of BluePrintCleanse Day Camp in Southampton. This day of wellness sponsored by the New York City-based juice company, would entail nutritional consulting, yoga, a natural food cooking class and spa treatments. That was certainly my cup of herbal tea.

Neither one of us was sure we could sacrifice an entire day to this, since we were both on deadline for the same magazine, and I wasn't sure if I'd be munching on carrot sticks while drinking green juice, then pass out from hunger at the end of the day. But on that Friday, we boarded a special jitney en route to the Southampton Estate and I was glad we did.

About three hours later, we had arrived. On one table inside the living room, were small bowls of raw, organic almonds. On another table was a pot of herbal tea, no coffee, which made me happy that I had raced off the bus just prior to departure, to buy a cup to satisfy my daily java fix. 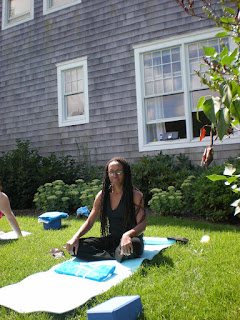 My first activity was a yoga class on the lawn under a clear blue sky and the warmth of the sun. Then while some guests were off having massages, facials or a scalp massage/shampoo and style, another group, which included me, joined the organic cooking class. 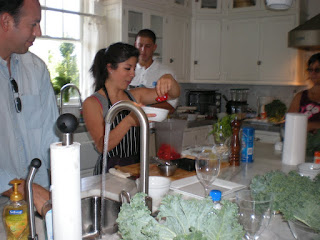 I only had time to learn how to make the Marinated Kale Sesame Salad (which I would later make for family members to much fanfare) just before heading for my full-body massage. This was followed by a vegan lunch, then later I lounged by the pool, sipping organic wine and eating veggies dipped in edamame hummus, while waiting for my next appointment, an organic facial. 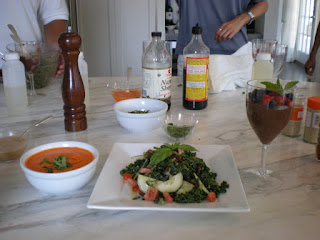 My day at the Camp ended with a consultation with a nutritionist who told me a lot of stuff that I didn’t want to hear, but frankly already knew. Even though I have a pretty good idea of what I should and should not eat, I was embarrassed when I jotted down the meals I had the day before, which were nearly devoid of nutritional value. I've had better days.
The nutritionist suggested that I drink 100% juice, eat organic eggs, and since I mentioned that I stopped being a vegetarian because I was losing weight and wanted, wait for it, to gain weight, she mentioned cheese (if organic and raw), turkey bacon that is nitrate-free (I had Butterball turkey bacon the day before–apparently not the best choice), raw nuts, raw nut butter, avocado, and organic cold pressed oil (olive or flax oil), all of which costs too much in NYC, but I guess if it will keep me out of the hospital and decrease the need for prescription drugs, it will be worth it.
At the end of the day, we were given a gift certificate for a complimentary three-day BCP juice cleanse, which I put off until earlier this week because I thought it would make me too weak to function. I wound up scheduling the cleanse to coincide with a colonoscopy, which may or may not have been a good thing.

Next: the juice cleanse.
Posted by Gerrie Summers at 11:49 PM