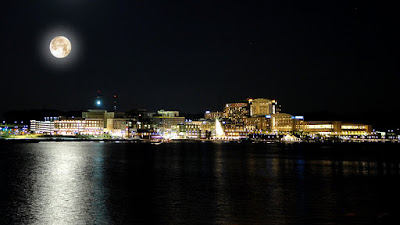 I started writing about travel some thirteen years ago and now it is rare when I take a simple vacation. When this year’s family reunion was held at National Harbor in Maryland, I thought "What a nice location for a reunion" and "Wonder if I can get a story out of this?" Even though my fifth finger (my pen) and the white matter (the "paper brain" known as a notepad) weren’t out, the words were still forming in my head.


National Harbor had controversial beginnings ranging from public complaints that the project would create a negative environmental impact to claims that it would ruin a heritage trail that has been in the works for years, yet there it stands–a 300-acre development that is marketed as a destination for shopping, dining and entertainment with the Potomac as an attractive backdrop. I was impressed. I didn’t step foot in any of the boutiques (too pricey I was warned), not even my favorite Life Is Good store. The dining options range from classic American cuisine at Ketchup, Mexican at Rosa Mexicano to the pseudo-healthy-depends-on-what-you-eat Elevation Burger. Elevation Burger serves beef that is from organically raised, grass-fed, free-range cows and french fries are cooked in olive oil (Didn't I read that you shouldn’t use olive oil for frying?) There are also veggie burgers, and I know at least one person who probably wouldn’t appreciate the Vertigo Burger and not just because you can build your own 3-10 patty burger. Actually the thought of that is dizzying. Not to fear, there’s also a Half the Guilt burger. I wandered with my cousins into Grace’s Mandarin for Asian Fusion cuisine and a nice Strawberry Mojito. Though our food arrived in a timely manner at Grace’s Mandarin, many of the restaurants have appallingly slow service.


For entertainment there’s a sunset concert series on Thursdays (May-August), Friday night jazz on the waterfront (and it was packed), Movie on the Potomac–free movies after sunset on the Plaza’s big screen. You bring your own lawn chairs, but coolers with food and/or booze are not allowed.


If you want to take in more sites than the Harbor has to offer, there are water taxis to Alexandria, Georgetown and George Washington’s Mount Vernon. A few of us took a $35 taxi ride to Washington, D.C. to the National Mall, the mile-long strip of free museums (known collectively as the Smithsonian).

Currently there are six hotels, including the 195-room Westin National Harbor where we stayed. The Walt Disney Company is going to build a new resort here as well. 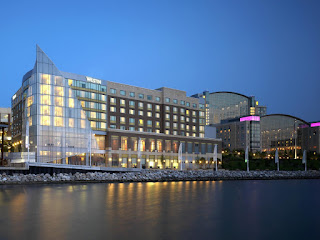 If you travel to the area by plane, transportation to the National Harbor can be a challenge without a rental. There are no direct routes between the airports and the National Harbor, so the Washington Metro area transit is not recommended. You’ll have to rely on SuperShuttle (which will stop at all the hotels at the waterfront), taxi or car service. A rental seems the way to go when you get to the harbor as well. If you need incidentals, a bottle of wine, inexpensive snacks, you really need a rented car or you’ll have to take a cab to the nearest mall with a CVS and liquor store–trust me, you won’t be able to get there by foot. As for parking, I noticed meters on the streets and a municipal parking lot (which you’ll probably prefer to hotel parking–the Westin’s price was pretty high).


Those minor problems aside, National Harbor provides a great weekend getaway and if you're visiting the Washington D.C. metro area, it's definitely worth a visit.