Linus (from Peanuts) was on to something... 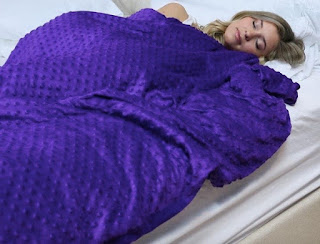 Heavy Makes You Happy. You’ve probably been hearing a lot about weighted blankets. It’s believed that weighted blankets help reduce anxiety and stress and can improve one’s sleep. Though there still needs to be more scientific studies, these blankets may also be useful for relieving chronic pain and depression, and help those with autism and ADHD. In fact, these therapeutic blankets have been used for several years to help patients with mental and physical trauma and have actually been used during certain surgeries, to lower stress in patients.

Weighted blankets are said to have calming and relaxing effects by providing pressure that activates the parasympathetic nervous system. Called “deep pressure stimulation” or "deep pressure touch," it is similar to the benefits of massage. Users have described their experiences with using weighted blankets as being nestled in a cocoon or being swaddled. Some even liken it to being hugged.

A weighted blanket should weigh between 7 - 12 percent of your body weight. It shouldn’t be so heavy that it restricts movement. 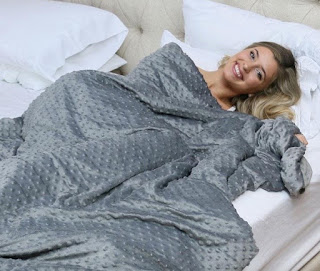 I tested the 15-pound Huggaroo Weighted Blanket ($129.99). It has a soft, removable, machine-washable duvet cover. The duvet is secured to the inner weighted quilt with fourteen double ties and loops to prevent shifting or settling of the food-grade polypropylene pellets inside that give the blanket its weight.

The first time I used it, it felt a little heavy, like a luxurious X-ray apron, and I had to take it off. Subsequently I got used to it and fell asleep pretty easily. My issue is more with tossing and turning, and getting an overactive mind to shut off. I noticed that I am less likely to toss and turn, because of the weight. It's not always as great at helping me stay asleep, however. Sometimes when using the blanket, I'll get too warm, and it’s not easily tossed off. I have to make an effort to roll it off of me. Fortunately, at those times I was able to quickly get back to sleep (something that I often have trouble doing).

People with certain conditions should talk to a doctor before using a weighted blanket. It might not be good for those with sleep apnea, asthma or other breathing issues, since it might put too much pressure on the chest and could disrupt breathing, or for those who have claustrophobia (I suspect the snugness could actually feel too tight, giving them the feeling of being confined.)

I also avoid using the blanket when I have neck and shoulder pain because (in my case) it makes it worse. 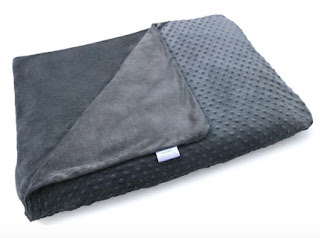 All that being said, I love the feel of the ultra-plush Minky duvet cover, which is machine washable. I love snuggling up in the blanket on the bed to watch television (yes, I know, bad habit), although with this blanket, the TV ends up watching me. On cool days during the spring and summer, I will probably use it without the weighted quilt.

For information, visit huggaroo.com.
Posted by Gerrie Summers at 12:10 PM