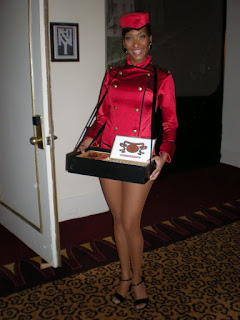 In all the years I've lived in New York City, I had never been inside the New Yorker Hotel. I didn't think about this until I walked into the beautifully refurbished lobby to attend the hotel's 80th Birthday bash. Many a celebration has been held here from weddings to bas/ bar mitzvahs, and on this day the hotel celebrated its 80th birthday while showing off a $70 million dollar facelift, (with a little botox and a tummy tuck thrown in for good measure) restoring it to its youthful 30's splendor--well, almost. With age you have to tweak your look a bit, to fit in with modern times.
As it turns out, The New Yorker Hotel is more than just the landmark that let me know I was heading in the right direction for the bus to the nearby Javits Convention Center. Erected in 1929 at a staggering cost of $20 million, the New Yorker Hotel opened its doors on January 2, 1930. It was designed in the Art Deco style that was popular in the 1920s and 1930s, a style also found in the construction of the Empire State Building and Chrysler Building.
For many years it was New York's largest hotel with 2,500 rooms, two ballrooms, ten private dining "salons" and five restaurants employing 35 master chefs. The barber shop was one of the largest in the world with 42 chairs and twenty manicurists. There were 52 telephone operators, and 150 laundry staff washing 350,000 items per day, all supported by America's largest private power plant which was installed in the New Yorker's sub-basements. 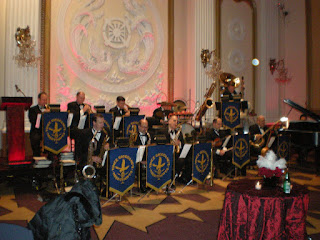 A blast from the Big Band past

During its heyday in the 40s and 50s, Benny Goodman, Woody Herman and Tommy and Jimmy Dorsey filled its ballrooms with the Big Band sound. Famous guests and tenants included John F. Kennedy (as senator during his run for the presidency), actors Joan Crawford and Spencer Tracy, Heavyweight champ Muhammad Ali and Cuban leader Fidel Castro. The Brooklyn Dodgers were headquartered at the New Yorker for the 1941 World Series and Yankee Joe DiMaggio lived there while rehabilitating an injury during the baseball season. 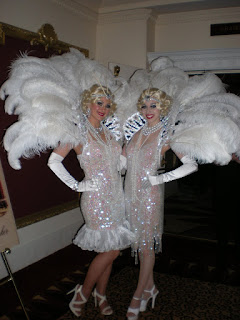 Just like the New Yorker, a mix of the old with the new. Check out those platform shoes!
[Photo: G. Summers]

Business began to decline in the 50s and 60s and the hotel closed its doors in 1972. In 1975 it was purchased by the Holy Spirit Association (also known as theUnification Church headed by Sun Myung Moon), which used it primarily as Moon's residence and for church business. In 1994 the Holy Spirit Association formed the New Yorker Hotel Management Company and the building was officially reopened on June 1, 1994 as a hotel, with 178 rooms available to the public. Renovations continued over the next five years increasing the total rooms to 860. 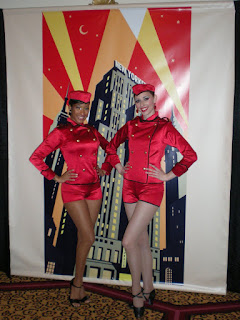 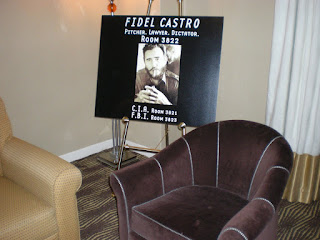 Fidel Castro was an infamous guest of the New Yorker. (Along with the Men in Black)
[Photo: G. Summers] 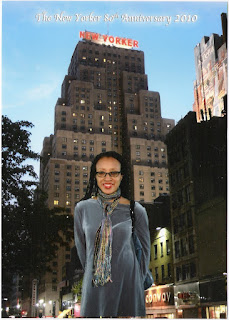 Guests were given the opportunity to pose in front of modern color backdrops or nostalgic black and white for commemorative photos.
[Photo: Event Kings] 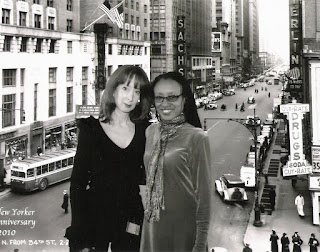 Why do I want to sing "Ebony and Ivory" all of a sudden? Friends beauty editor Candice Sabatini and SR's Gerrie Summers in classic black and white.
[Photo: Event Kings]

The New Yorker Hotel now features 912 guest rooms and suites on the top 21 floors that have been restyled and renovated. (The first 18 floors are for commercial tenants and university housing. There are separate elevators for guest floors.) There are 12 meeting and conference rooms, a Fitness Center, Business Center, catering department, and refurbished restaurants, Cooper's Tavern and the 24-hour Tick Tock Diner.