These 6 New Orleans Restaurants Are a Must

You can’t visit New Orleans without having Breakfast at Brennan’s.  Located in the French Quarter, Brennan’s is the breakfast tradition. This is not breakfast you can rush through.  No quick cup of coffee, two fried eggs and toast.  Make sure you have enough time to leisurely enjoy your meal, which starts off with an “eye opener,” an alcoholic drink such as a Cajun Bloody Mary or Brandy Milk Punch.  Then try the New Orleans Turtle Soup as an appetizer followed by one of Brennan’s famous dishes such as Eggs Hussarde (poached eggs on homemade English muffins, coffee cured Canadian bacon, hollandaise and marchard de vin sauce).  Even if you’re stuffed and you probably will be at this point, you must finish with dessert.  The world famous Bananas Foster is insane. (Of course if you’ve already had an early breakfast, you can get away with an eye opener,  Turtle Soup and Vanilla Scented French Toast, which I did this go-round since I experienced the more traditional breakfast on an earlier visit to NOLA. 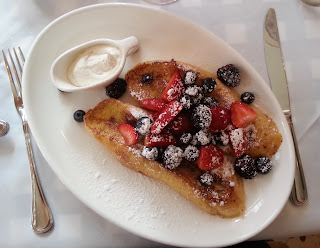 
Brennan’s has recently undergone a few renovations, so be sure to walk off your breakfast by taking a moment to peek at the restaurant’s Courtyard, the Murphy Room (a chess room) and other dining rooms (each “tells a specific story”.)  The front room, which once served as a kitchen, is now a lovely dining room with views of Royal Street and the Supreme Court House of Louisiana. 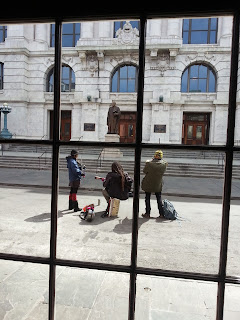 SoBou, described as a “spirited restaurant south of Bourbon,” is inside the W Hotel on Chartres Street in the French Quarter.  I was offered a sampling of signature dishes, such as the Yellow Tuna Cones (from Snacky Things on the menu). The cones are designed to pop the whole thing in your mouth, if you can, and are delicious. From the Small Bites, I had the YellowFin Tuna En Escabeche (grilled onions, pickled fennel and local citrus) and the Gumbo Du Jour, which on that night was 7 Greens Gumbo, a 100% vegan gumbo, with seven different greens, including black and red kale.  If all vegan food tasted this good, I’d be vegan.  Finally from the Big Bites, I tried the Saffron Butter Glazed Geaux Fish (toasted garlic blackened shrimp, beurre monte blanched heirloom carrots with onion-lemon wilted black kale.)  It’s also a great place to go for Happy Hour, with a number of tasty cocktails. The Georgia O’Keefe II (Cathead honeysuckle vodka, elderflower, hibiscus, citrus and cava) has quite a kick. 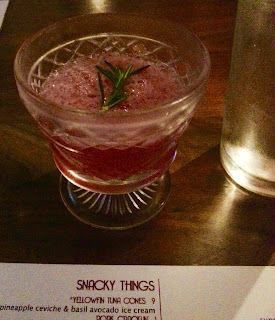 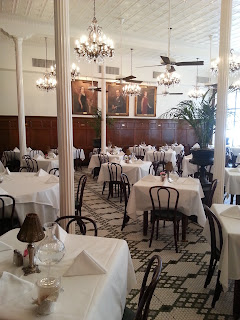 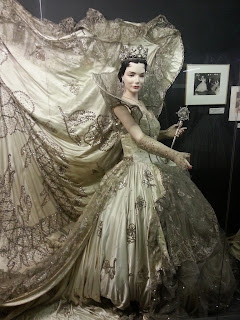 Dooky Chase’s Restaurant features cajun/creole cuisine and is one of the oldest African American restaurants in the nation, in one of the nation’s oldest African American neighborhoods, Treme.  Chef Leah Chase, considered the Queen of Creole Cuisine, has served up classic dishes like red beans and rice, gumbo, fried chicken, serving several presidents, including President Obama. When I visited, back in 2010, there was a portrait of Barack Obama with a huge, satisfied grin. I knew I was in for a treat.

I was saddened to hear about the passing of Edgar Lawrence “Dooky” Chase, Jr., husband of Leah Chase and owner of Dooky Chase’s Restaurant, on November 22, 2016.

Cochon, located in the Central Business/Warehouse District, is run by chefs Donald Link and Stephen Stryjewski, and is described as pork-centric, Louisiana cuisine and inspired by the Cajan and creole traditions passed down by the grandparents of Chef Link.  The restaurant serves locally sourced pork, fresh produce and seafood to create authentic cajan cuisine in a rustic, but cozy interior inside a renovated warehouse. 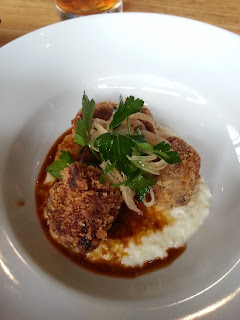 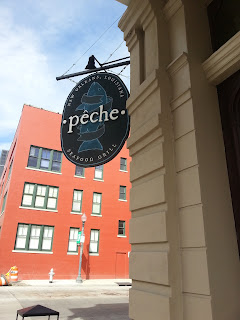 Peche, Chef Link and Stryjewski’s seafood restaurant, is also in the Central Business/Warehouse District. The menu is inspired by South American, Spanish and Gulf Coast cuisines, with fresh, local fish grilled over hardwood coals. Feast on smothered catfish or the whole grilled fish of the day, as well as fresh oysters at the oyster bar. Let’s say Peche does for fish what Cochon does for pork.  A lot. 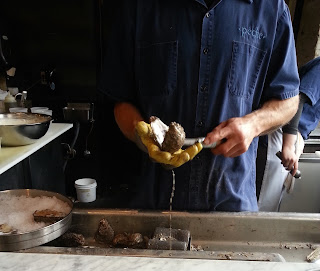 Posted by Gerrie Summers at 9:45 PM